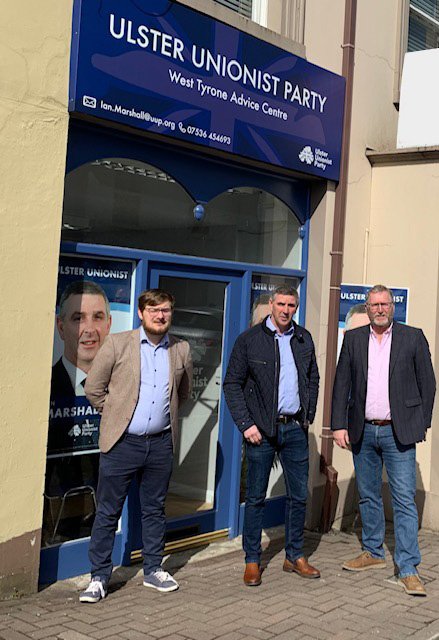 “The opening of an Ulster Unionist Party Advice Centre in Omagh is a sign of our commitment to West Tyrone. I am determined to ensure that we have an ongoing physical presence at the heart of West Tyrone, a place where we can serve the needs of its people and the constituents can speak to Ulster Unionists on a face-to-face basis, dealing with the challenges they face.”

“There is a resurgence in support for positive, confident, constructive pro-Union politics in West Tyrone as there is across Northern Ireland and the importance of opening this Advice Centre cannot be overstated. It`s a vital addition to the service which the Ulster Unionist Party can provide to constituents. It will also support the work of local councillors and I look forward to engaging with more people in the coming weeks and months.

“We will not only use this Advice Centre to support constituents, but also to use it as a base to promote West Tyrone. This is an area that has punched above its weight in business and industry, education and academic performance, hospitality and sport.

“I look forward to working alongside Matthew Bell who is an extremely hard-working young Ulster Unionist representative for Omagh and we want to be able to deliver an enhanced service for Omagh and the wider West Tyrone constituency.

“I would also like to thank the local people who dropped in for a chat and offer their best wishes. The feedback from locals has been really positive and there`s a lot of support for a strong brand of unionism that is proud of its identity, but respectful of others. And I hope that the Assembly elections will provide the opportunity for an Ulster Unionist MLA to represent West Tyrone in the Assembly.

“I will promote a confident, positive, optimistic brand of unionism promoting a union for all, working for all, in the best interests of all - a revitalised unionism no longer held back by fear promoted by those thirsty for power at any cost.”

“A visible presence in Omagh will ensure that the Ulster Unionist Party has a listening ear and can respond to the fears and concerns of constituents on matters such as the cost of living, healthcare, education, and infrastructure. It’s critical that we return an Ulster Unionist MLA for West Tyrone.”