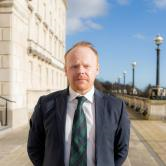 Ulster Unionist MLA John Stewart has suggested the Union Flag be flown over Stormont on three additional days to compensate for the loss of seven days under new regulations proposed by the Department of Culture, Media & Sport (DCMS).  The three days he would like to add to the list are St Patrick’s Day; the first of July to mark the Battle of the Somme, and the Twelfth of July.

“Today the Assembly debated an amendment to the Flags Regulations. People will  be all too well aware of the challenges we have faced in getting any kind of consensus on the flying of Flags in Northern Ireland and it is a subject which has regrettably been the cause of much angst and division.

“The Union Flag flies over Stormont to reflect and respect the United Kingdom’s sovereignty in Northern Ireland. It is not about identity as some people seem to think.

“Up to now the Union Flag has been flown over Stormont on 18 days a year in line with the Department of Culture, Media & Sport (DCMS) regulations. Under an amendment to the regulations we are to lose seven of those 18 days, which is more than a third, and all of those dates being lost relate to Royal birthdays. In future, HM The Queen’s two birthdays and the birthday of HRH The Prince of Wales will be the only Royal birthdays to be observed for the purposes of flag flying.

“I think it would be a reasonable suggestion that in that context, we should conduct a review and look to add some days to mitigate the loss of the seven.

“The three which come to my mind would be St Patrick’s Day; the first of July to mark the Battle of the Somme; and the Twelfth of July.

“I think this is a reasonable suggestion and I would hope to see the Commission support it in the future.”