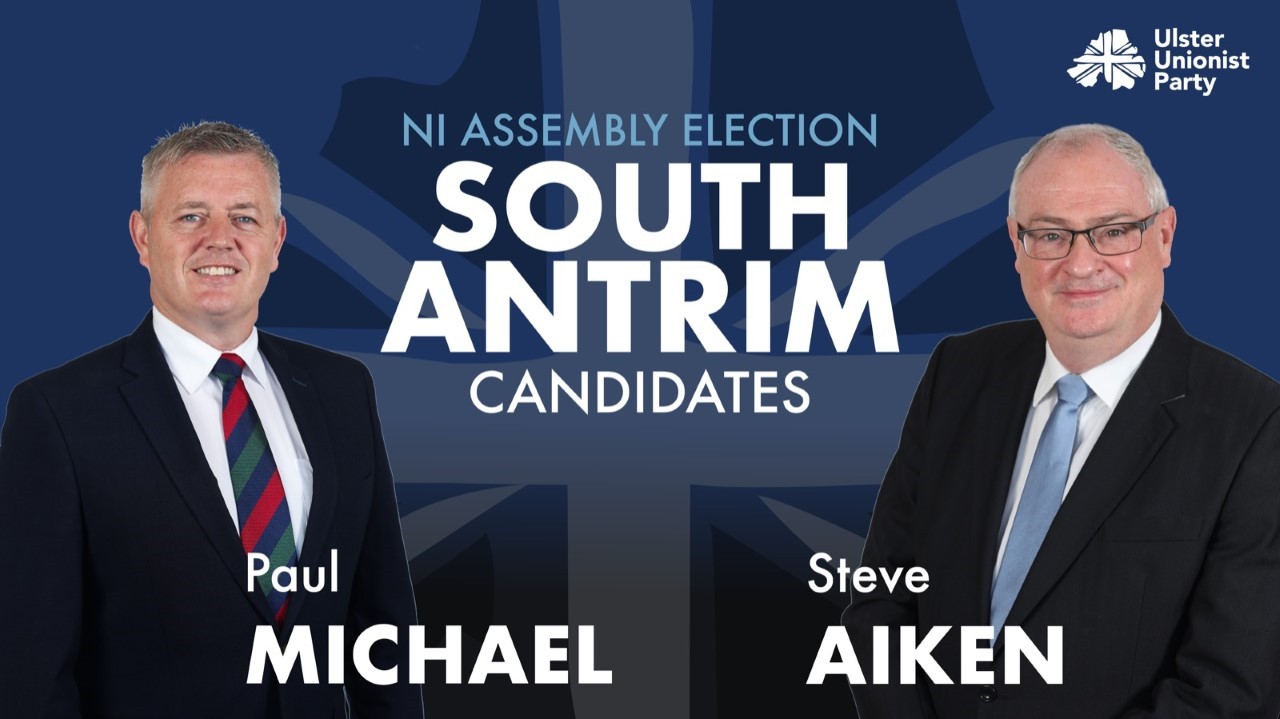 The Ulster Unionist Party has selected Dr Steve Aiken OBE MLA and Alderman Paul Michael BEM as its candidates to run in South Antrim in next year`s Assembly elections.

“It is with the greatest honour that I and Alderman Paul Michael BEM, have been selected by our party to stand as Ulster Unionist Party candidates in the forthcoming 2022 Assembly Elections. South Antrim is our home, and we have been proud to have represented our constituency in the Northern Ireland Assembly and Council chamber over the last few years.

“We go into the next election under the leadership of Doug Beattie with a rejuvenated, positive and progressive party - putting hope, not fear, as the driving force of our message. As Doug has said, we’re back, and our aim is to make our Leader the First Minister of Northern Ireland. Our Party has the candidates, the vision and the strength to be the largest party, and it is our job as candidates to deliver this message of a positive pro-Union voice to our country.

“Paul and I will be on the doors, we will be taking part in hustings events, we will have meet-the-candidate events, we will be hosting online events, and I invite everyone to engage with us. We take no-one’s support for granted, we want to earn your trust in both our party and in us for the next Assembly term. We want to represent you, the great people of South Antrim, and for both of us, there can be no higher political calling.”

“It is a real honour and privilege to have been selected to run for South Antrim in the forthcoming Assembly elections and I look forward to working with our existing MLA Steve Aiken in the area.

“Under Doug Beattie’s leadership we have witnessed a renewed confidence, an Ulster Unionist Party with a positive, inclusive vision for Northern Ireland and one that I wish to be part of at the highest level representing the good people of South Antrim.

“I believe my experience in local government over twenty years gives me the tools to take the next step on the political ladder. As a former pupil of Ballycraigy Primary School, Antrim High School and employee of Antrim Royal British Legion, it was an honour for me to be elected Mayor of the legacy Antrim Borough Council in 2011 and then again in 2018 as the Mayor of Antrim and Newtownabbey Borough.

“Then last year to be recognised by Her Majesty the Queen in the New Year’s Honours with a British Empire Medal for my services to local government here in South Antrim was an occasion I will never ever forget.

“Serving the people of our great borough is an enormous privilege and has allowed me to meet many good people doing great work every day for the good of all who live here. It is that community spirit which drives me on to the next challenge.

“My goal is to deliver a strong and fresh voice for all the people of South Antrim in Stormont and to work with Steve in promoting South Antrim by bringing in new investment and focusing on improving areas such as education, health, infrastructure and many other areas which so need improvement.”