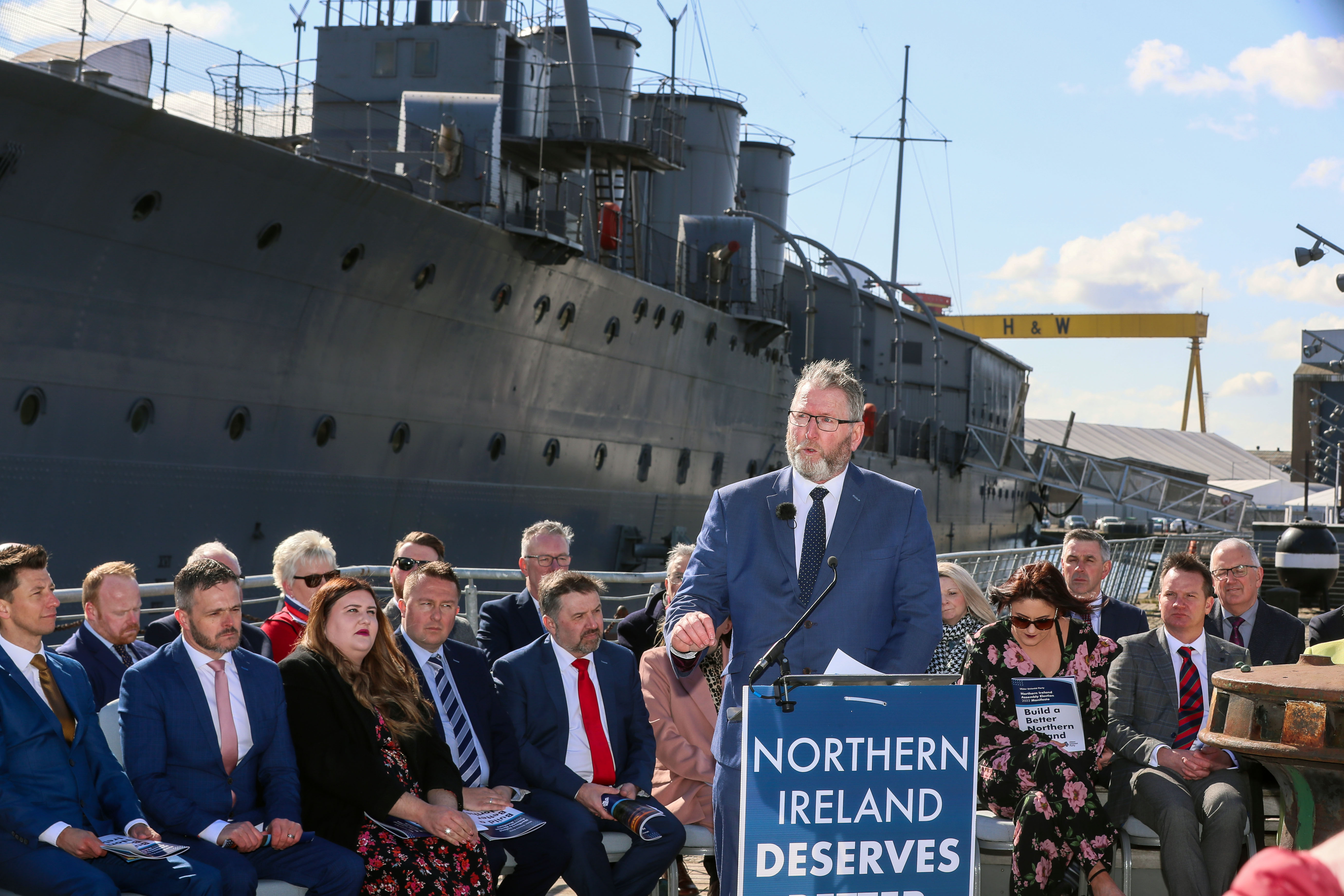 "It is no accident that we stand here beside HMS Caroline for the Ulster Unionist Party’s Assembly Election Manifesto launch.

No accident because this warship, the last cruiser from the Battle of Jutland during WWI, is a reminder of our shared history. Over 260 men from Ireland died during the battle, men from all corners of this island caring neither about religion nor political aspirations. Just service, together, as Irishmen.

Of course, things have changed on this island since that monumental sea battle, but for Northern Ireland we still have the ability to stand as a union of people promoting our place within the United Kingdom.

Others will not share that vision but for the Ulster Unionist Party it drives our mantra of country before party, people before process.

Secondly, HMS Caroline reminds us of our faltering economy. A tourist attraction, one of a kind, mothballed over recent years instead of adding to our rich tourism industry standing alongside the Titanic centre, the Giants Causeway, the Game of Thrones exhibition in Banbridge and many more.

A Northern Ireland at peace with itself with a world beating tourism industry adding to the lifeblood of our economy.

Thirdly, we are not tucked away in some hotel room, we are here, where people can be found, where opinions can be heard even if they are opinions we disagree with.

On the 5th May as a party we will stand on a prosperity and wellbeing agenda.

We will focus on the cost-of-living crisis by transforming our economy. By driving forward initiatives that have sat for too long, dormant on the shelf, without the leadership to bring them home. Our manifesto will not be a series of asks, they will be a series of promises.

We will continue to support city and growth deals worth up to £1.3 billion. Back rates relief including a small business discount of between 20 - 50% and crucially set up a Northern Ireland Job Skills Fund similar to SDS in Scotland and Skillnet in the Republic of Ireland.

We want all our ports and airports to be designated as Freeports.

The economy will drive everything.

It will support our Health service and the Health Minister - who I use this platform to pay tribute to for his selfless dedication over an extraordinary period in Government - has outlined our proposals on Health.

We will look to improve our infrastructure to allow our people to be more connected delivering high quality transport networks as well as ensuring our target on social housing can be met.

We will establish an independent infrastructure commission which will provide an annual infrastructure assessment and implement the regional strategic transport network plan.

Review energy security and prices as well as developing hydrogen as more than a nominal fuel.

Housing must be a stand-alone outcome of any Programme For Government to deal with the 40,000 on the Northern Ireland Housing Executive waiting list of whom 30,000 are in housing stress.

We will increase, through fundamental change of the Northern Ireland Housing Executive, the number of social houses built year-on-year while striving to have over 9,000 private homes built each year for the next 15 years and increase co-ownership.

As Ulster Unionists we care about all our people, young and old, active and vulnerable.

We will create a stand-alone loneliness strategy.

We will make Northern Ireland more accessible through changing places legislation, a £5million accessibility fund to improve access to buildings for disabled people. Review the Disability Discrimination Act 1995 with a view to updating it.

Ensure the release of the £38 million sub-regional stadia fund because sport is a route to wellbeing, to community cohesion, to a sense of national pride.

Devolution helps us do that and as a confident, optimistic, inclusive unionist I will use the devolution settlement to secure our union by providing for our people.

I will use a quote from a previous Ulster Unionist leader:

In our vision, devolution has to go further. Power has to be devolved off the Hill, through the councils into communities and as close to the family unit as possible, because that is where you make real change.

We need a strategic outlook towards the future. Not a short-term sticking plaster.

Regardless of what others are saying there will be no fundamental change to the constitutional position of Northern Ireland within the UK. Issues around the protocol can and will be dealt with so instead of using the protocol as an election slogan let’s get to work, the real work, of dealing with it.

There will be no United Ireland in my lifetime or my children’s lifetime. If you believe that is a fundamental truth, as I do, then we can set it aside in order to concentrate on the issues affecting the daily lives of those who live here, work here or visit here.

I know some will disagree and that’s fine - my belief is as strong as theirs - but I am also committed to working with them and everyone else in Northern Ireland.

So I make an appeal to all those who believe in Northern Ireland, who see its long term future within the United Kingdom, to put your shoulder to the wheel. To raise your voices and promote the positives while we work together to deal with the negatives.

We need our young people to see that coming out to vote is a civic duty, those disaffected or disenfranchised from politics to see that there is a party, a pro-union party, that will do more than just say no, who will have a positive vision for the future because Northern Ireland deserves better.

I have outstanding candidates running in this election. From every walk of life, committed to their communities and to the country.

But for me they are more than just candidates, they are friends and they are the future.

The Ulster Unionist Party can make the changes that are needed here in Northern Ireland if people have the courage to leave fear behind and vote for hope.

On the 5th of May you have the ability to say hope wins over fear, by voting for the Ulster Unionist Party and a positive future for Northern Ireland." 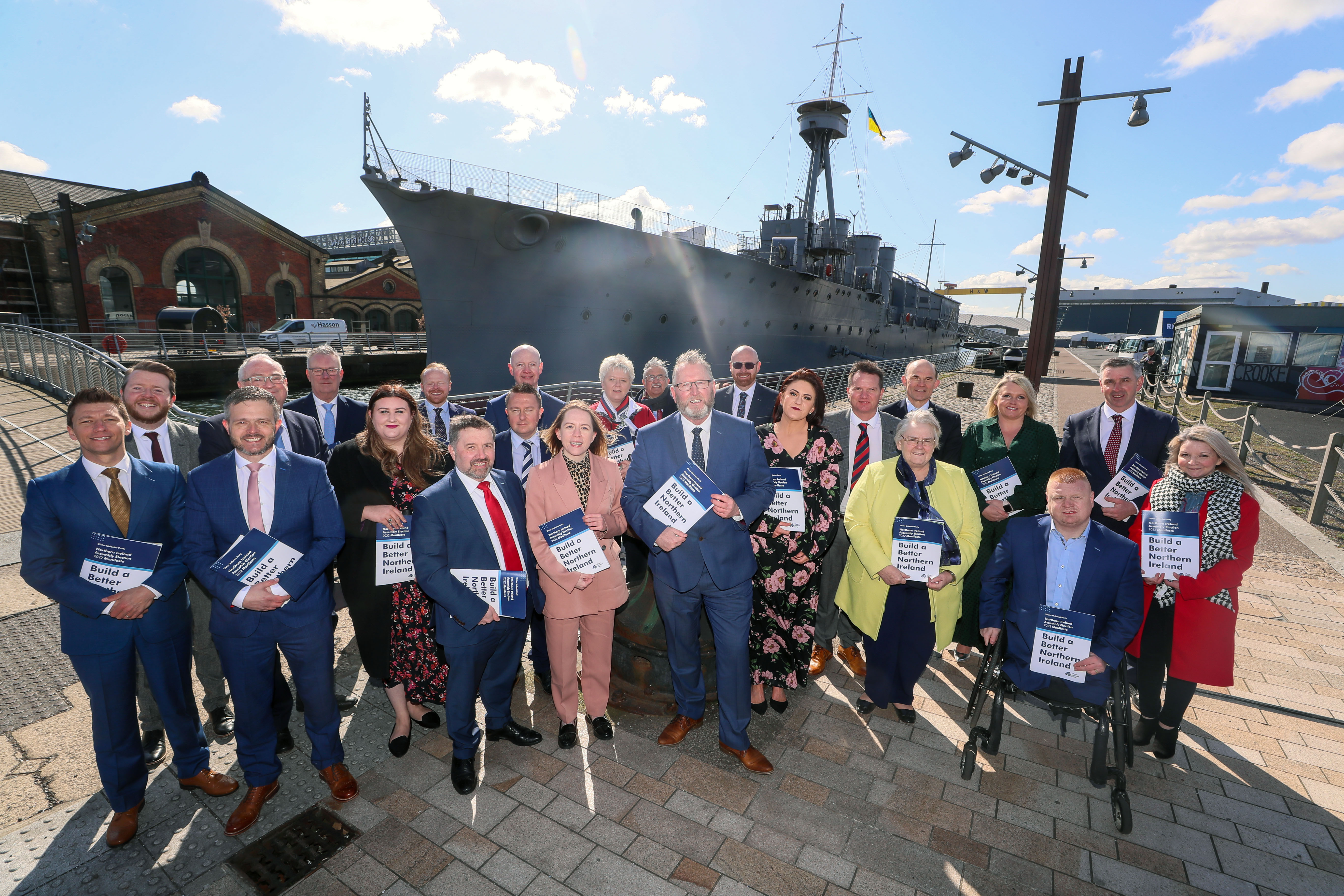