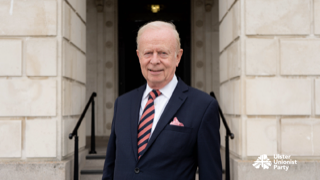 “I read remarks made by DUP Leader, Sir Jeffrey Donaldson, at the Crossgar anti-Protocol rally with shock and dismay. What got my attention was the following statement:- ‘The only leverage we have is our participation in those institutions – that is the reality, and if we continue to do business as usual we will be taken for granted.’

“Sir Jeffrey has been in Parliament for a quarter of a century and his party has held the leadership of unionism, almost uncontested in the House of Commons, for the best part of 20 years. Furthermore, amid great fanfare, his party held the balance of power in Westminster during most of the negotiations of the Protocol between 2017 and 2019. We all remember the picture of Sir Jeffrey signing the ‘confidence and supply’ deal which led to the DUP supporting both the Theresa May and Boris Johnson Governments.’

“After all of that, to stand up in front of a hall full of very concerned and worried unionists and say that the ONLY leverage that Sir Jeffrey and his party have is their participation at Stormont is a startling admission! If all those years in Parliament and deals with Government and winning elections adds up to adopting the Sinn Fein tactic of crashing Stormont at the very time we need it most, then it is an admission of total failure.’

“If this is all he’s got after 25 years, what does it say about the strategy and tactics that he and his party have adopted?’

“It’s a message of despair for unionists and explains why, when the DUP took over the leadership of unionism in 2003, they inherited a majority of support for unionism amongst the electorate from David Trimble and a majority in the Assembly as well. Now, sadly, both have been squandered by foolish and ill-advised policies, such as reducing the number of Assembly seats per constituency from 6 to 5, resulting in 16 unionist losses out of the 18-seat reduction!’

‘What vision for the future was he giving to his audience? What hope were the younger generation getting offered to them from that rally? It was like listening to speeches made in the 1970s and 1980s. Totally out of date and guaranteed to lead to failure. Have we learned nothing?’

“There is another way - a democratic way; a way with full engagement with Government and the community of Northern Ireland as well as direct intervention with the EU.’

“The argument over the Protocol is gradually being won. Those, such as the Alliance Party, who along with Sinn Fein were calling for the ‘rigorous implementation’ of the Protocol are in retreat. Government, which proposed the Protocol, realise that it isn’t fit for purpose and even in the EU itself there is a realisation that changes are needed.’

“What we need is the Executive to be leading the call for change instead of crashing it. Copying Sinn Fein tactics rarely works for unionism. It merely plays into republican hands and allows them to repeat their narrative that ‘Northern Ireland is a failed political entity.’

“The other sad thing about the Crossgar rally was that there was no admission or apology for the DUP’s involvement in the creation of the border in the Irish Sea. While propping up the Johnson government in October 2019, they endorsed his proposal for the Border in the Irish Sea, describing it as ‘a serious and sensible way forward.’

“Unionism can do better than this. Admitting defeat, which is what Sir Jeffrey was doing at Crossgar, is not the way ahead. There are alternative ideas out there to undo much of the damage created by the Protocol. We should be working together with business, agriculture and the wider community to solve the problems, not create new ones.’

“But perhaps the scariest thing about his remarks that the ONLY leverage he has is his participation in the Executive, is that Sinn Fein has the same opportunity now, given to them by Sir Jeffrey, to negotiate a return to the Institutions. What if Sinn Fein say no, we’re not going back, therefore there will be no Stormont. That then means that Sir Jeffrey, by his own admission, has no leverage at all! Sinn Fein must be loving this.”