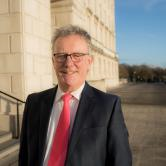 Mike Nesbitt MLA, the Ulster Unionist representative on the Policing Board, has called on local political parties to ensure the PSNI budget is increased to meet commitments to increase staffing levels.

“Three weeks ago following issues raised at a meeting of the Policing Board’s Resources Committee regarding a major cut in police numbers as a consequence of the draft budget, I wrote to the Chief Constable seeking clarification.

“I have now received his response (see attached), and he has confirmed what his senior colleagues told the Policing Board, namely that ‘ although the draft budget proposals include a ring fenced allocation of £14.8m for staffing costs, they also reflect a 2% cut of £14.6m, largely offsetting this new funding.’

“The Chief Constable’s response makes for sober reading. Rather than meet the 7,500 headcount envisaged in NDNA and indeed by Patten, he won’t be able to maintain the 7,100 officers planned by March 2022 and given the budgetary constraints officer numbers could fall to 6,700 by March 2023.

“That would be 800 officers short and it’s little wonder the Chief Constable says that ‘the impact on frontline policing would be significant.’

“All political parties here should reflect on his final point – ‘The case for increased investment in policing remains the same. This was reflected in the commitment to increase officer headcount to 7,500 but is at odds with the proposed budget allocation.’

“The Ulster Unionists are a Party of law and order, no ifs no buts. If we as a society expect the Police to deliver the first class service that we demand of them, then we need to ensure they are properly resourced and have enough officers in place to do that job.”