Conservative Party must act to bring stability to Government – Empey

Conservative Party must act to bring stability to Government – Empey 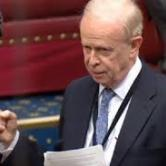 Ulster Unionist peer Lord Empey has called on the Conservative Party to take swift and decisive action to end the instability and restore a steady hand to the wheel of government, for the sake of the country.

“The interim report from Sue Gray has resulted in the worst of all worlds for the effectiveness and standing of the UK Government. Had the interim report been the final word on the matter, the Prime Minister may well have survived. Under those circumstances we would have a stable government able to deal with the series of national and international crises facing our country, especially the enormous economic shock of the rise in the cost of living which will hit us like a tsunami in coming months.

“But what we have now is a wounded Prime Minister with the question about his future hanging over his head and that of the Government. We now have Police investigations underway into 12 events - some of which were attended by Boris Johnson - and the final report from Sue Gray still to be published.

“This is the worst possible outcome for our country. Further instability, further revelations and further resignations are all now inevitable. All people are talking about here in Westminster is the latest rumour as they sweep the corridors and tea rooms. It's a terrible situation.

“I feel that the Conservative Party has to make up its mind immediately as to what it intends to do about its leader and put the country out of its misery. No government can function properly under these conditions. Northern Ireland for example is facing many serious problems in the coming days, some of which, such as the Protocol, were the product of Boris Johnson's policies. We need a steady hand on the wheel of government, not a never ending circus.”