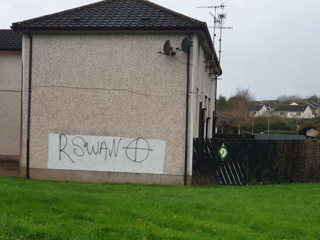 “The vast majority of people in Northern Ireland recognise the sterling job that Robin Swann has done as Health Minister throughout the pandemic.

“Unfortunately it appears that a few individuals are unable to see what the rest of society can. Two days ago he had to make a complaint to the police about threats made against him and his family and today we have learned that someone has taken it upon themselves to spray a threat on a wall in the Newell Road area of Dungannon. I genuinely pity the type of mind that would do such a thing.

“Last night also saw a number of disgraceful attacks on politicians – Robin included – on social media, with the Justice Minister Naomi Long in particular on the receiving end of vile misogynistic abuse. People are entitled to an opinion, but they are not entitled to express it in the poisonous manner we have seen from some individuals. These trolls cannot and will not be allowed to silence democratically elected politicians or close down debate. My thoughts and best wishes are with Robin and Naomi.”