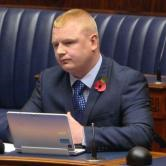 “I continue to be contacted by many people from across East Belfast and further afield who have still not received their spend local card despite applying at the outset of the scheme. Presently, the Department has set the 14th December as the deadline for anyone to spend their card, however, with just a week remaining those who have not received their cards will not be afforded sufficient time to avail of them.

“It is my view that nothing is preventing the Minister from extending the spending deadline until the end of January 2022, which would allow ample time for the remaining cards to be received and spent.

“I would therefore call on the Minister to bring forward an extension today to provide much-needed certainty for those still waiting on their cards.”